Where to find true love on Valentine's Day

If creating poetry is a bit like building a house – requiring careful construction and reflecting both philosophy and style – then it follows that a home is like a poem. This is most evident at Tor House, Robinson Jeffers’ longtime Carmel residence, which he expanded painstakingly over the years as he expanded his body of poetry. 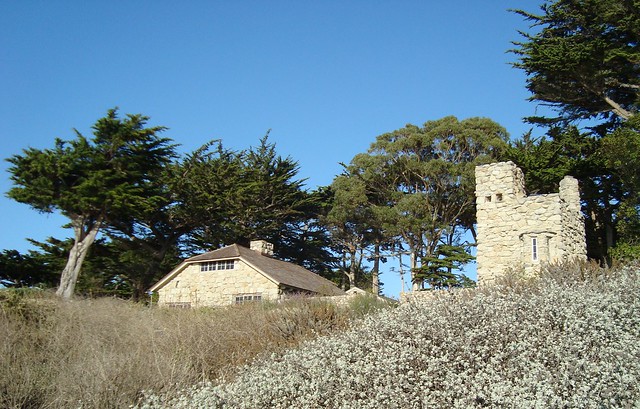 Upon their arrival in Carmel in 1914, Jeffers and his wife, Una, would often stroll to their favorite spot – a craggy hill (or tor) which would soon mark the site of their home, built primarily from the rocks of Carmel Point. Most days consisted of Jeffers constructing his poems in the morning and his home in the afternoon, a house with a coastal view so grand that Jeffers faced his desk inland, figuring otherwise he would never get any work done. The building offers a hint of worldly whimsy (one can spot portholes from one of Napoleon’s ships, a tombstone from Ireland, even a portion of the Great Wall of China). But at its essence, it is an intimate creation – especially Jeffers’ romantic decision to build for Una a stone tower on the premises.

For five years, Jeffers rolled boulders up from his private beach and meticulously set them into place, making “stone love stone,” as he put it. By the time he completed the structure, it was as much as six feet thick and almost forty feet high. He named it Hawk Tower, in honor of a frequent flying visitor, and observed, “I hung stone in the sky.” So if you visit the tower, corkscrew your way up a stairway to Una’s second-floor sanctuary, then ascend a little turret on the third floor, and then an even steeper stairway to the top of the turret. From there, you can look out toward the endless sea and the seashore upon which a man and his wife built their life together. And you can’t help but marvel that Robinson Jeffers’ finest love poem was made of stone. That’s the kind that lasts forever.

Excerpted by permission from Carmel magazine.

Brad Herzog is the author of more than 30 books for adults and children, including three acclaimed American travel memoirs. He has lived on the Monterey Peninsula since 1997.