Spooky season is back! With Halloween fast approaching and the crisp, fall air on the way in, it's time to indulge in some haunted history. And Monterey County has no shortage of that! Here are some classic sites and museums where you can get your scare on.

Wind-thrashed, wave-smacked lighthouses are classic ominous symbols in horror movies. Having seen its share of shipwrecks, the Point Sur Lightstation is thought to be a haven for lost souls. Locals have claimed to spot an old man standing at the window looking out over the ocean — despite the fact that the quarters are vacant...

Tours of the Lightstation will resume November 2019.

Despite being the oldest on the U.S. west coast, this lighthouse is still functional. A long list of lighthouse keepers are chronicled on the house's website, where you can read all about some of their dark, rugged tales.

For those who appreciate relics, this U.S. National Register of Historic Places is a must-see during the haunting season.

Climb aboard the Ghost Tour trolley and tour historic Old Town Monterey as you explore superstitions, folk tales and horror stories from the former capital of Mexican California. Relive the intriguing — and sometimes ghastly! — tales of former inhabitants.

The terrifying tour is 90 minutes of paranormal exploration.

In 2017, Tor House made its television debut on Ghost Adventures for Travel Channel, where three paranormal hunters sought out the ghost of American poet Robinson Jeffers. Hawk Tower stands just next door, and both imposing structures are regarded as haunted entities.

In the words of Jeffers — who lived here with his wife from the early 1900s — "We raised two boys here; all that we heard or saw was beautiful — and hardly human." But was it paranormal? One thing is for certain: the unique, eerie stone remains will not be forgotten any time soon.

This historic haunt dates back to as early as 1833. James Stokes worked out of his home as a pharmacist, but despite his "profession", his medications killed more patients than saved them. Later, the home was converted into a restaurant where there were reports of disembodied female voices calling for help, shifting mirrors and furniture, and strange silhouettes — some in 1800s period clothing — lurking around the property.

Not only did dinner guests remark on these sightings, but staff members as well. In fact, according to one waiter at the Gallitin Restaurant, if you stood in the main room by the old front door, you might feel someone — or something — tap you on the shoulder. Although the restaurant is no longer open for business, the legacy of its devious owner and his unlucky patients lives on.

Don't let the name fool you; the home is merely dubbed from an 1879 stay by famous author Robert Louis Stevenson. It was a modest boarding house for impoverished artists and nomads in the 1800s and was actually called the French Hotel. The previous inhabitants were the Giradin family — all of whom died horrible deaths in the mysterious adobe.

The Giradins are rumored to haunt the property to this day. Don't be surprised if you see the spirit of the family housekeeper in a black dress or even Mrs. Manuela Giradin herself. Keep an eye out for rocking nursery chairs, coughing from the second floor and Manuela's signature smell of roses.

This museum was the first public site built under an American flag. However, Colton Hall was a grim site, serving as a jail and execution hall where many soldiers were put to death. Workers and visitors have experienced cold spots, eerie whispers and the distinct feeling of being watched closely.

It was on the second-floor porch balcony that soldiers were hung to die a grim death. It's definitely worth a visit to listen for the footsteps many people have heard on that very same porch.

Everyone loves a good mystery, and Pebble Beach delivers. Welcome to Ghost Tree, where the weather and the ocean are unpredictable and downright ferocious. Standing on a bleak cliff overlooking the volatile sea, this barren and lonely tree marks the site of dangerous ocean waves that crash against the rocky outcrop known as Pescadero Point. In fact, an experienced big wave surfer died here in 2007 trying to ride some chillingly gnarly 50-foot waves. But this is not the first death at Ghost Tree.

A few hundred years ago, Maria del Carmen Barreto Garcia Madariaga owned some 45,000 acres of the California Central Coast, including Pescadero Point. After her death in 1856, people reported sightings of a mysterious woman in a white lace gown. If you keep your eyes open, you might catch a glimpse of the "Lady in Lace" strolling down the middle of the road — and then vanishing into the foggy ocean without a trace. 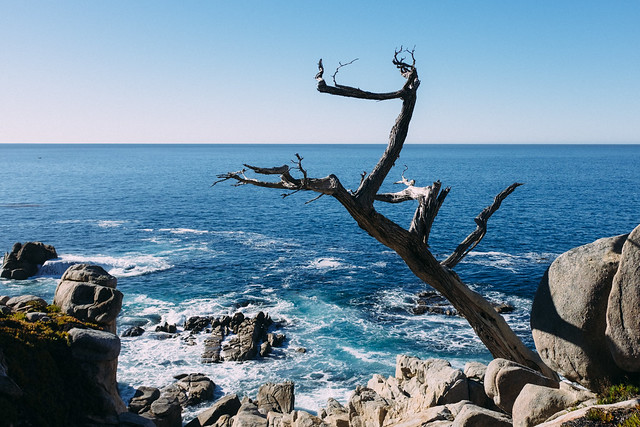 We hope you enjoy all the thrills and chills that Monterey has to offer you this Halloween. Click here for even more ghost stories in the area and check out our list of spooky events happening in Monterey County this season.